It was in the late afternoon, about seven hours after a student gunman entered the cafeteria at Thurston High School in Springfield, Oregon. Armed with two hunting knives, his rifle, a 9x19mm Glock 19 pistol, and a .22-caliber Ruger MK II pistol, the gunman also carried 1,127 rounds of ammunition. He shot 50 bullets, 37 of which went into the bodies of 26 students, two of whom died. As I walked through that school cafeteria prior to a meeting with students and parents, it felt like it was the only way I could have credibility with them… to intentionally bear witness to the mayhem remaining following the chaos of two bone-chilling moments earlier in the day. 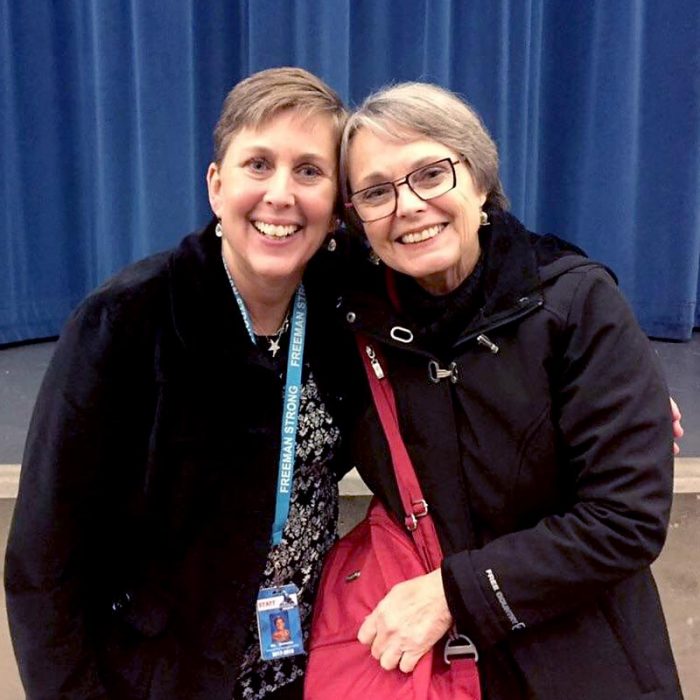 It’s vital to help schools, students, staff, and the community recover in the aftermath of catastrophic events, especially shootings.

Walkthroughs in cafeterias and down hallways after shootings are indescribable moments. The lingering smell of blood envelopes the utter chaos of overturned chairs, broken glass, belongings left behind, and upturned book bags, all with numbered evidence tags on them. It is like stepping into some place that is beyond eerie, beyond absolute silence, and beyond life. I don’t know why my heart doesn’t stop.

Officers who work these scenes are remarkable. They always agree to walk me through. They nearly always speak quietly about what haunts them. And they always stand silently with me when I stop walking and have to close my eyes to take in all that is beyond what I see. 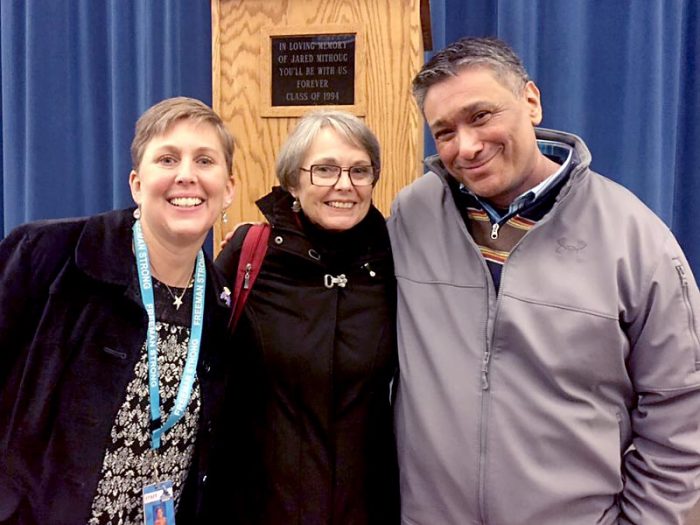 Walking the scene is critical because I can’t imagine standing in front of the students and their families if I were to do anything less. Not having been there to experience the terror of it, but I can at least witness the horror of what is left behind. The least I can do is bear witness. Bear witness on behalf of the students who died, those who lived. Those who saved others, those who gathered students from the hallways into their classrooms. On behalf of those who performed life-saving efforts and those who helped load ambulances. Those who stood with parents as they waited for a word or text, and those who have stood by hospital beds knowing only an uncertain future.

In walking into these moments knowing that no matter how dark the aftermath, it is my job to shine light on the path. Bring hope for the journey of recovery. To believe in the resilience they can’t yet believe in, seeing that resilience is carrying them every step of the way. 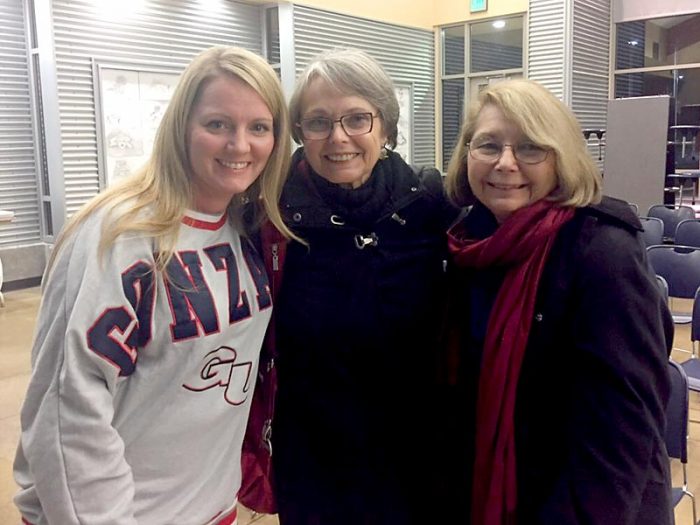 Walking on behalf of students into our legislative committee meetings, hearings, and briefings is like the other end of a continuum. Approaching the microphone in a committee meeting in the Oregon legislature as the first speaker after the committee members entered the room, I watched the committee chair take off his NRA cap and drape it over his engraved name plate, carefully pointed toward me. He glanced up with a smirk. As I talked about the aftermath of school shootings, he talked with his sidekick, knocking elbows and chuckling. Others on the committee were respectful, listened and asked questions, but no helpful legislation came out of the committee. 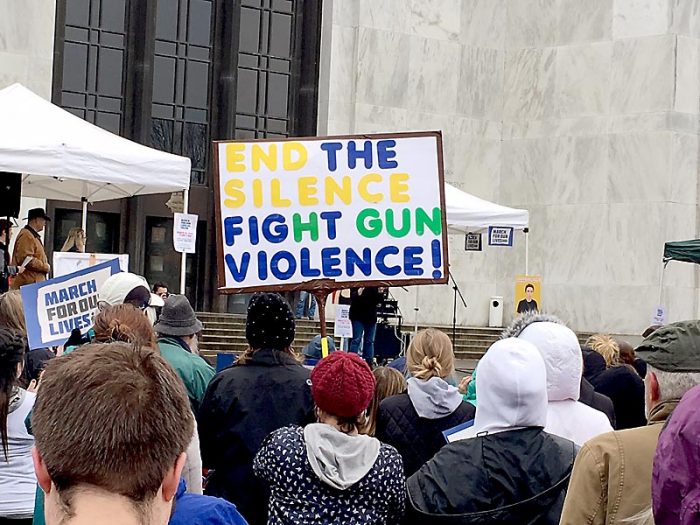 Walking at the State Capitol to Address Gun Legislature

Another time CeaseFire Oregon asked if I would join them in addressing newly proposed legislation. It was then that I learned that we have no law prohibiting open carry of weapons inside the state capitol. Nor are there metal detectors at the doors. During hearings for proposed legislation for anything related to weapons brings out great numbers of those who bring their weapons into the hearings rooms. Some sit calmly, but some have remarkably menacing attitudes. The expense for the state to hire all the extra needed armed security is significant, so they set aside certain days for all gun legislation hearings. They set aside a special room for those who would testify to support common sense gun legislation because of the intimidation by those in the audience who were armed. 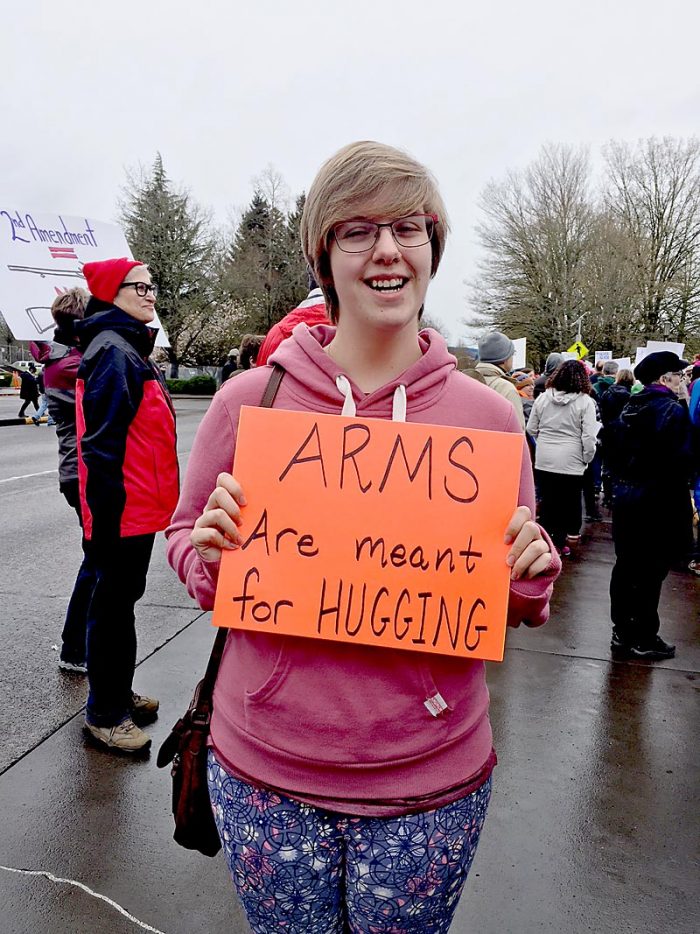 Walking on Capitol Hill to Testify for Students

I’ve testified other times as well, but all were very different than providing a briefing in Washington DC. There absolutely were metal detectors at the doors and security was obvious. On that day, I walked with the woman who oversaw organization of counselors in the aftermath of Columbine. We’d talked on the phone many times during my stay in Littleton (for the week following their shooting), but we’d never met in person until the American School Counselors Association asked us to give a briefing on the hill. I was privileged to speak on behalf of school counselors everywhere, and loved that they also invited Peter of Peter, Paul and Mary to sing, as well as to talk about his “Don’t Laugh at Me” anti-bullying program. 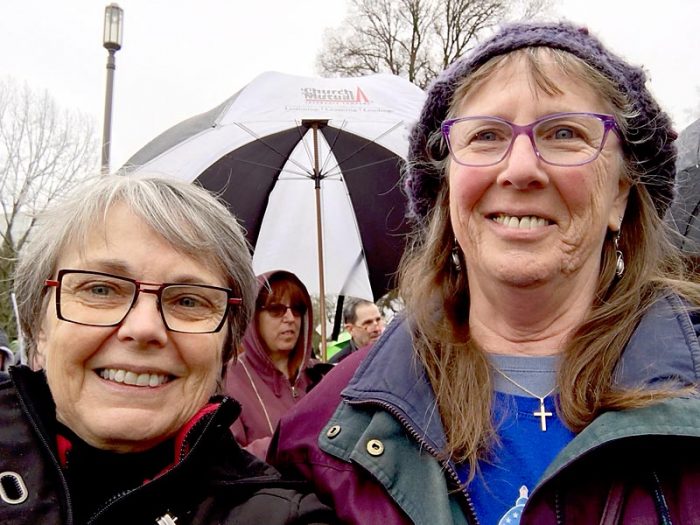 Cheri with Berta Aronson at the March 24, 2018 Portland, Oregon march

These shooting events occur in all kinds of places. Although the numbers of dead and injured continue to rise, not much has changed. I’ve walked in elementary, middle and high schools after these events. I’ve walked in urban, suburban, and rural communities. 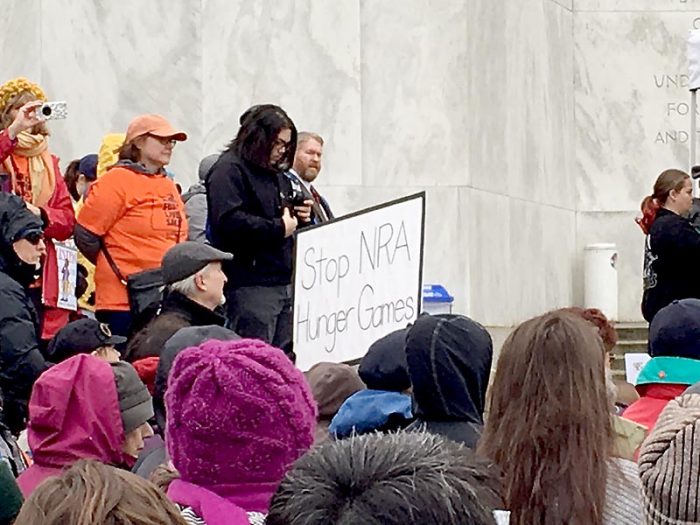 Today:  Walking in a Student-Led March

Many schools discouraged youth from participating in the walkout of March 14th. To those administrators, I would say, rise above your fear, concern or hesitation, and recognize that there was nothing anyone could teach students in 17 minutes that holds a candle to what they will learn if teachers will imbue their lessons with skills and tools that will help these students further mobilize their effort. Teach them to give press conferences and invite the mayor, the community, and the media to hear their message. Let them organize teach-ins and help them write plays and songs. Expect them to be respectful and respect their passionate efforts. Remember, one day your future will depend on them.  And, since we haven’t solved the problem of school shootings, who are we to stand in their way?

Just as my walking for the past 20 years holds no candle to what these students have been able to do, no lesson in civics, journalism or government can teach them what they’re learning by active engagement in the process and liberties we are guaranteed by the work of our founding fathers. In the freedoms granted by our Constitution. And in freely taking legal, ethical, and purposeful action to make their voices heard. 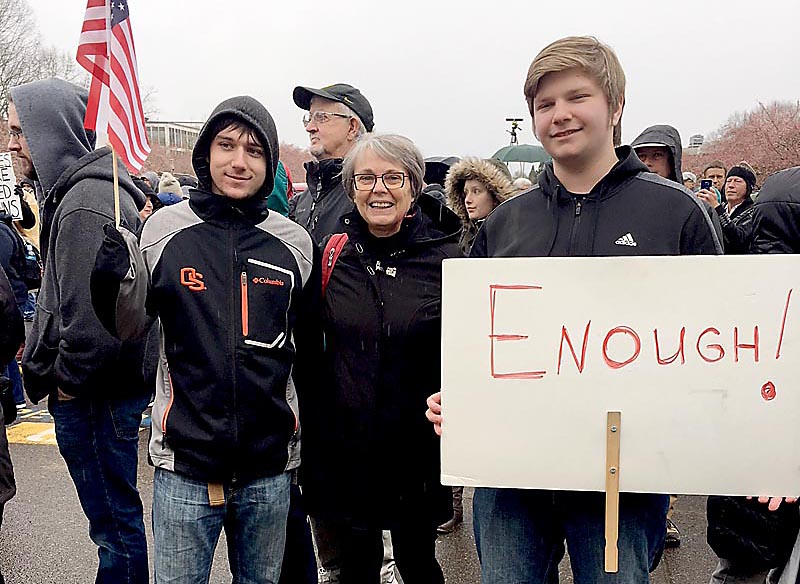 To Each and Every Student Who Marched:

I am awed by your power, inspired by your determination, uplifted by your courage, and charmed by your chutzpah. I am hopeful by your numbers, given your mantra of “register and vote.” You are doing what we have not been able to do. You have mobilized many whose hearts were with the cause, but who weren’t yet on their feet. You have ignited a fire, and we need to fan those flames. Given we haven’t provided for your protection, we need to give you our all now. It is the least we can do!

Like Loading...
Today I Walked…2018-05-292019-10-22https://5radicalminutes.com/wp-content/uploads/2018/01/5rm_logo-dark.png5 Radical Minuteshttps://5radicalminutes.com/wp-content/uploads/2018/05/cheri-with-portland-oregon-student-marchers-march-2018-2.jpg200px200px
About
Cheri Lovre
Cheri has worked for 40 years responding to schools as they deal with grief, trauma, and crisis. Her experience and expertise form the foundation for the 5 Radical Minutes program, which is used in more than 80 schools and districts across the country.
Search
About Us

5 Radical Minutes delivers increased connection in a simple yet insightful manner. This daily practice teaches you new rules of engagement: to listen more openly, to reflect more quietly, and to respond more thoughtfully.